skip to main | skip to sidebar

My sweet Princess Pancake,
When you came to us, you had already lived most of your life.
You spent your remaining years with us, and it is my deepest wish that you knew we loved you very much.  It’s been a year, and I’ve thought about you every day.
You were a part of my life for a very short time, but you will be in my heart forever.
I hope you’re getting along with Sugar and Babydoll.
Posted by the real doll nerd at 7:11 PM 2 comments:

Sugar was the little dog who changed my life.
Usually, a dog's love is unmatched.  But I was always convinced that I loved her just a little bit more than she loved me.  After a whole year, it's still difficult for me to look at a picture of her.
Of course, I have a doll-scale version of my little Sugar.  But I haven't come up with a design for a photo shoot yet.  It may take some more time. 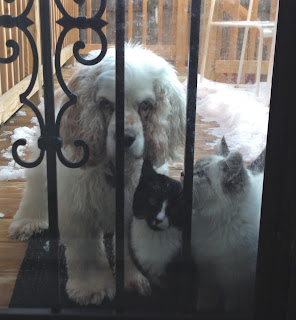 Dear Sugar,
I miss you so much!
Your other daddy misses you so much.
Your kitties miss you.  Poor Ash was heart-broken.
Even your brother Porkchop cried for a solid month.
I hope you're getting along with Babydoll.
Posted by the real doll nerd at 12:48 PM 1 comment:

A Tribute to Babydoll

To my dearest Babydoll, I've been planning this tribute for quite a long time. Almost for as long as you've been gone. I miss you all the time. I think about you every day. You are always in my heart.  I know that a blog post, with a picture of a doll and a mini version of you would all be quite meaningless to you, as well as unnecessary; we always knew how we felt about each other, a "bonded pair." And as I type this, I realize how ridiculous this whole project has been, but I needed to do it. 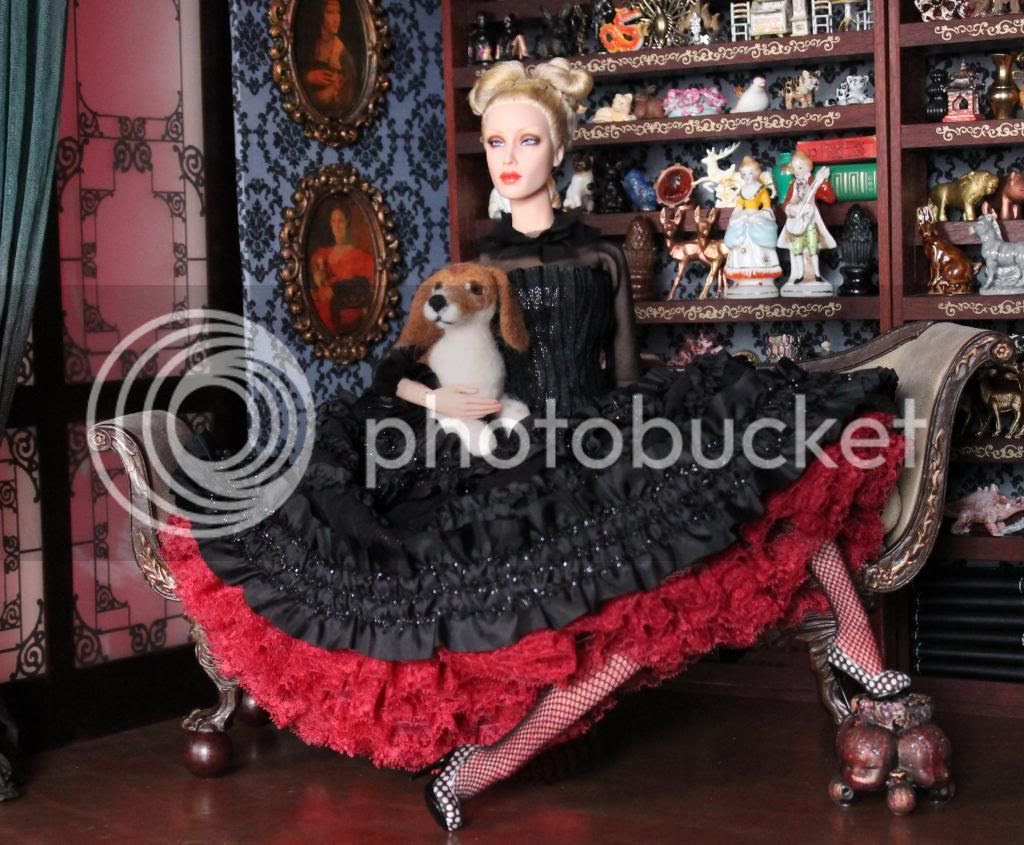 For anyone interested in the nuts&bolts:
*mini Babydoll -felted sculpture by Sharon of DreamwoodArtDesigns on etsy; commissioned for me by my better half, supercooldollhouse
*quarter-scale Sybarite fashion doll is Venus by Superdoll London
*her frilled sheer blouse is "vintage" Superdoll London
*her dress was originally by Robert Tonner New York, but has been customized by me for the shoot
*her polka-dot pumps are FBR by Superdoll London
*her wig is my creation
*the setting is an ingenious room box designed by supercooldollhouse, customized by me for the shoot (custom walls of hand-dyed fabric with miniature portraits in custom frames, custom hand-painted floor, custom window frame and drapery, custom shelves filled with miniatures, some collected and some created, chaise by Bespaq reupholstered and customized, unusual footstool by me)
Posted by dollnerd at 3:54 PM 3 comments:

Two years.
Still miss you!
xoxoxo
Posted by dollnerd at 8:45 PM No comments: 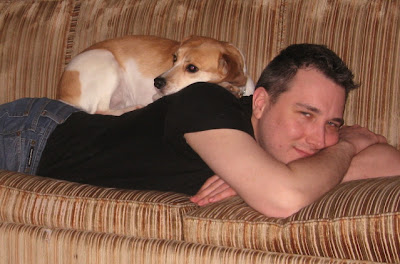 The Real Babydoll & The Real Doll Nerd
Posted by dollnerd at 8:04 PM 1 comment:

from left to right:
"ted" tammy's brother, by ideal / "bob" miss suzette's boyfriend, by uneeda /
"ken" painted hair 'shortie' by mattel /"ken" painted hair /"ken" flocked hair /"ken" porcelain /
"ken" silkstone / "ken" malibu / "ken" one modern circle / "pierre" fashion royalty, by integrity
so, here's how this comparison chart came about:
a couple of weeks ago, i was surfing ebay. i won the porcelain ken (wearing his tuxedo, nrfb) for $28.00 and the silkstone ken (the 'fashion insider' gift set, nrfb) for $15.00. i was excited for such fantastic deals! i was also excited to compare the sizes of these dolls, as i always keep an eye out for dolls that can share their clothes with supercooldollhouse's fashion royalty boys. the pierre doll pictured belongs to supercooldollhouse. i'll show more interest in the fashion royalty dolls when integrity figures out how to get the color of the head, hands, and feet to match the rest of the doll's body. [although i do love the misaki that supercooldollhouse gifted me]
when the porcelain ken arrived, he went through the same 'alien abduction' procedure as do all dolls belonging to the real doll nerd: full strip-down and inspection. this way, the doll's quality can be assessed; outfit and accessories are assessed separately. porcelain ken's body sculpt is very nice. his paperwork explains that he is not a true reproduction of the original ken, but an updated sculpt; i like it. the porcelain has a nice weight and feel. the details of the sculpt are displayed well by the porcelain. i'm very happy my new porcelain ken (his partner, porcelain 'vintage' barbie in her wedding gown is on her way) if i had to pick one thing i would change, i would give him a poseable head --his head and torso are one piece, rather than two separate pieces which would be preferable.
silkstone ken actually arrived the same day as porcelain ken. the sculpt is the same as porcelain ken except for the right arm and the articulation at the neck. the details of the sculpt have been mostly lost in the silkstone. i'm also not happy with the neck; at the seam, the neck angles inward rather than continuing straight as it should. just a funny side note (funny-sad, not funny-ha-ha) both 'premium' dolls come with plastic display stands --oh mattel, tsk tsk.
then the o.c.d. kicked in and i felt the need to do a big 'police line-up' comparison. so the early ken dolls were dug out of their respective hiding spots. during this game of dolly 'hide-n-seek' i came across ted and bob. neither are "kens" or even mattel-made for that matter, but since one could argue they were ken-knock-offs, i included them. poor bob, what an odd-looking guy. whereas mattel debated over the size of ken's "bump," bob's unique leg joints don't even leave him room for a va-jay-jay.
malibu ken is included because his sculpt represents most ken dolls since his first makeover back in the 60's. yes, some have twist-waists and different arms, etc, but the torso has remained the same. is mattel still using it? the 'one modern circle' ken is included to show a better execution of the vintage repro head-sculpt than is seen on the silkstone ken. pierre is included to show how he towers over all the other guys.
so even though i didn't find any guys to share clothing with the fashion royalty dudes, i'm glad i added the porcelain and silkstone kens to my collection. silkstone ken has several silkstone barbies to hang with (if he wants to) and a porcelain barbie is on the way....... hhmmm ....... looks like a barbie comparison line-up could be in store for the real doll nerd.
Posted by dollnerd at 7:03 PM 8 comments:

a day in the life of the real doll nerd, married to supercooldollhouse 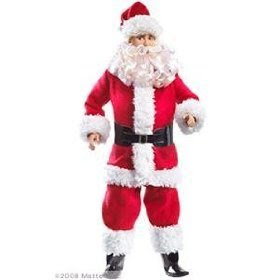 today, i popped into walmart for some hair goop. and since i've never been able to leave a walmart before surfing the doll aisle, i ended up skimming through the barbies. usually, i would have left the aisle with a disappointed sigh. i can't remember the last time i wanted anything from mattel. but this time, i had found the clearance aisle first. a single 'ricky ricardo as santa' sat on a shelf amongst other random clearance stuff. actually, this doll's name is stupid long:
"I Love Lucy" Starring Desi Arnaz as Ricky Ricardo in "The Christmas Show"
the clearance tag had been partially ripped off so the price wasn't discernible. hmm. the lucy stuff starts out overpriced. maybe that's not fair to lucy; all 'collectible' barbies start out overpriced. (not as overpriced as jason wu's dolls, but that's another rant altogether) as i scanned the box under the price checker, i thought "c'mon, 12 bucks." the scanner showed "$19.00" not bad. not great, but not bad. and then i thought about the future, specifically, some time in mid-december. a time when i will be sick of christmas. i will have decorated my store and set up gift zone after gift zone. if you happen to be in a macys this holiday season, know that everything you see has been painstakingly planned for months ahead of time. (i'll be starting my holiday floorplans as soon as i finish with back-to-school, in about a week)
anyway, back to my 'sick of christmas' time: i will be exhausted from sorting gifts and dealing with everything else holiday-related. i will be sitting at my computer, staring vacantly at the screen. maybe i'm at the tonner site, still waiting for pics of the torchwood and doctor who dolls. maybe i'm at the dae site, looking for the pics of their metamorphosis collection they've been promising since i was twelve years old. but, most likely, i'll be trolling ebay, when supercooldollhouse asks:
chrissy, do you have any red velvet?
i probably have red velvet, but it's probably not anywhere i can easily get to. and it's probably not just a piece of fabric, but a whole garment i've picked up because of some trim i want from it. so i'll have to get up and dig through bins of fabric and clothing pieces. then i'll have to remove whatever i want, before giving scdh his alotment of red velvet.
a little later, i will hear:
chrissy, do you have any white felt?
this one will be a little easier, unless scdh isn't satisfied with the look of the felt. in which case he'll ask for white rabbit fur. even though i'm vegan, i still keep a stash of reclaimed fur from old garments. so again, more digging, more dismantling, etc, etc.
later:
chrissy, do you have white barbie hair?
chrissy, do you have black ken boots?
chrissy...
suddenly, 19 bucks seems like a bargain!
now, i'll only have to hear:
chrissy come see my christmas set-up; darius is dressed up as santa.
Posted by dollnerd at 7:28 PM 3 comments: